skip to main | skip to sidebar

All Hands are invited to join the Ocean State Chapter of the Submarine Veterans of World War II and the U.S Submarine Veterans, Inc. Rhode Island Base at a dedication ceremony for a memorial to the submarine USS R-12 (SS 89), lost on 12 June, 1943.

Invited guests and speakers include The Honorable Governor Donald L. Carcieri and the Commanding Officer of the USS Providence (SSN 719).

Chaplain from Naval Base Newport Manuel Biadog and the Silver Dolphins Color Guard from Submarine Base Groton will be providing their services for the memorial dedication. 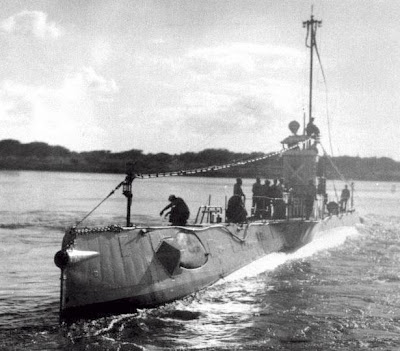 On June 12, 1943 between 12:20 and 12:25pm the R-12 was underway to conduct a torpedo practice approach. As she completed preparations to dive and was riding on vents, the forward battery compartment began to flood. The collision alarm was sounded. The Commanding Officer from the bridge gave orders to blow main ballast and close the hatches. The R-12 sank in an estimated 15 seconds from the sounding of the collision alarm. The Commanding Officer, two ships officers and three enlisted men were on the bridge at the time and were the only survivors. Those lost include four U.S. Naval officers, and thirty-six U.S. Naval enlisted men, and two Brazilian observers.

It was the opinion of the Court of Inquiry that the cause of the loss of R-12 was unknown, but probably was caused by the rapid flooding of the forward part of the ship through a torpedo tube. 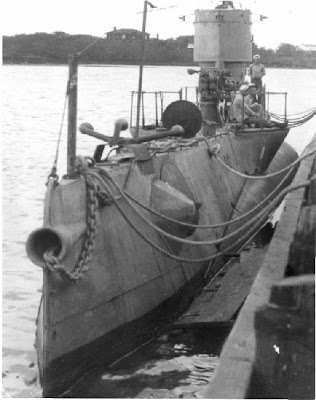 Have you noticed that pairs of Middle Eastern men have been popping up in the news this August, only a few weeks away from the 6th anniversary of 9/11? 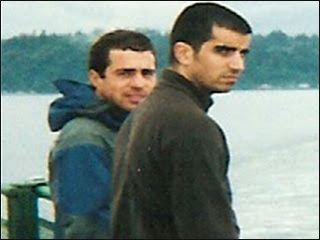 Aug 20 the FBI asks for the public to help identify the above two men.
From Seattle King 5 News:

The FBI says the men were seen on more then one ferry and more than one run over the past several weeks. They were also taking photos of parts of the boat, which the agents won't reveal, but that apparently aroused the suspicions of passengers and crew alike. 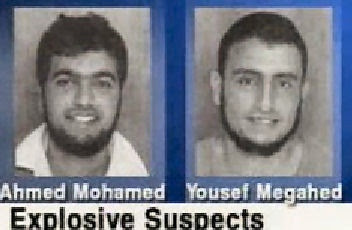 As reported by the AP

TAMPA, Florida - Two Egyptian students at a south Florida university were indicted Friday on charges of carrying explosive materials across states lines and one was accused of teaching the other how to use them for violent reasons.

Ahmed Abdellatif Sherif Mohamed, 24, an engineering graduate student and teaching assistant at the Tampa-based University of South Florida, faces terrorism-related charges for teaching and demonstrating how to use the explosives.

He and Youssef Samir Megahed, 21, an engineering student, were stopped for speeding Aug. 4 in Goose Creek, South Carolina, where they have been held on state charges. A federal grand jury in Tampa handed up the indictment.

Both these incidents have similarities other than pairs of middle eastern men being involved. Both occurred near Naval installations and both installations have nuclear submarines berthed.

In the first case, of the men on the ferry, one of largest ferry routes is the Seattle to Bremerton run. Bremerton is the home of the Puget Sound Naval Shipyard (PSNS) where nuclear powered ships are serviced including submarines.

I wouldn't want to speculate too much but this coincidence is a little disturbing to this former bubblehead. I wonder if the FBI is checking the records of foreign trained ferry captains and harbor pilots?
Posted by Lubber's Line at 11:08 PM 1 comment:

Time for a sea story inspired by a post by Vigilis at Molten Eagle .

I only got seasick once when making patrols and yes it was on the way back in after a full 70 day deterrent patrol.

On the Simon Bolivar we were heading back into with an ETA to tie up alongside the tender shortly after sunrise. That meant we’d surface at O-dark-30 and transit in with the sunrise at our backs. I pictured seeing the low lands of and getting use to the distinctive smell of the coastal estuary again. No more gray bulkheads and San-1 inboard venting. A nice calm ending to another FBM patrol, Not So! 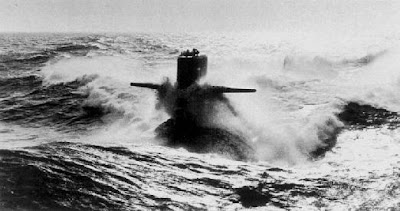 I had the mid-watch which meant I’d be the Nav-ET tech on watch for our transit in. Got up and headed for mid-rats, PIZZA! “I’ll have mine loaded with pepperoni, thanks”. With a contented belly full of greasy pizza I made my way to the Nav-center to relieve the watch. Two hours later I was sitting in the dark on the ESM stack while we were surfacing in GAIL. “No Close Contacts” was called from the scopes and me on the ESM. After all what idiot would be out in a full Gail at 2 or 3 in the morning? Other than the US Navy that is…

We surfaced the ship and headed in with no one on the bridge at first because of the weather. Eventually the bridge was rigged and I was shifted from the to the Radar. With bucket at the ready I was prepared to watch the radar do that roundy roundy thing as the boat heaved, rolled, pitched and shuttered. Occasionally a large amount of water would come cascading down the bridge access trunk into the bear trap at the bottom of the ladder. I can remember thinking “Man, those poor F&*%ers on the bridge were getting hammered”. This went on for a good part on the remainder of my watch.

When I was relieved on the radar, lets just say, my bucket was empty but only because of my somewhat centerline orientation. Back aft I heard tell it was a hurl fest in nuke land. I was safe and had dodged the puke bullet or so I thought. It was time for a pee call and down to the lower level crews head. The closer I got to the head the stronger the puke smell and then the chains and signs “BLOWING SANITARIES”. Do I hold it, chance it and find a bowl that wasn’t full of puke or trek aft to the one head near the nuke land vomitorium?

Boom, woosh that golden flapper sound, someone had just opened the ball valve on one of the heads. I not only got to see the aftermath but also smell it. A putrid mix of vomit and the remaining contents of the sanitary tank, the poor SOB had vomited in the bowl then vented it back in his face. I lost it then and there in the bucket I was getting ready to stow.

“Station the piloting party.” Feeling somewhat purged, you always better after letting go a good one, I headed back up to control ready to help plot our course into the calmer waters of Cumberland Sound.

That was a 425 foot Fleet Ballistic Missile Submarine, I can only imagine the rocking and rolling an SSN goes through. Seasickness it’s not just for surface pukes.

Four Months Submerged at the Pier

She has been sitting on the bottom for over four months and now it’s the US Army, or is that, the US Navy to the rescue. 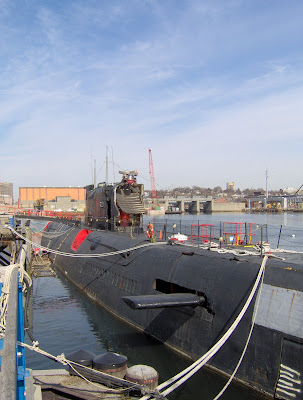 The Juliett 484 (K-77) Soviet era cruise missile submarine and co-star in the movie “K19: The Widowmaker” with Harrison Ford has been a floating museum in Providence R.I. for the last few years. The sub stopped being a floating museum back in April of this year when an intense spring nor’easter overwhelmed its rusting and leaky aft ballast tanks. Stern down the sub started taking on water through the aft public access hatch cut through its pressure hull. She flooded stern first and within about a day she was on the muddy bottom in over 35 feet of water. The next day she settled and rolled to port, parting a mooring line like a gunshot. The US Coast Guard closed the pier for public safety reasons.

From the outset the USS Saratoga Museum Foundation, owners of the Juliett, have said they intend to raise and restore the submarine but were unsure where to get the funds to so. The first hurtle a detailed salvage survey and engineering work is no longer a concern. U.S. Navy and Army divers will be conducting the survey dives and Navy Engineers will also be involved. 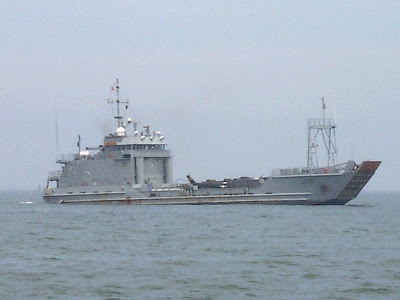 The US Army LCU (Landing Craft Utility) New Orleans (LCU-2031) has arrived in Providence RI from Tampa FL and will act as the diving support platform. Approximately 30 divers will be involved as part of the Department of Defense's Innovative Readiness Training program. The Army divers are coming from Fort Eustis, Va., and the Navy divers are coming from Norfolk, Va.

Both the Navy Expeditionary Combat Command (NECC) and Naval Sea Systems Command (NAVSEA) will be involved in the operation. NECC will be conducting the diving operations and NAVSEA will be providing the engineering expertise for planning the eventual recovery of the submarine.

The Providence Journal quoted Lt. Cmdr. Leslie Hull-Ryde, public affairs officer with the Navy Expeditionary Combat Command as saying “The idea is to give the divers training that differs depending on the location and conditions in terms of underwater visibility and other factors.” continuing that “Whenever possible, we want to simulate a realistic training environment”.

As with all things submarine related the Army and Navy involvement in the recovery of the K77 has been kept low key until finalized. This blogger knew about the Navy’s involvement over a month ago but like a good sailor kept running silent until the news broke today.
Posted by Lubber's Line at 10:22 PM No comments:

The story of the Russians planting a flag on the sea floor at the geographic north pole is too rich to pass up all the metaphors, both the press and me included.

(Russian English Language News Footage)
I have a previous post back in march covering the tourism aspect of the MIR expedition and how you could have been there for $80,000USD or $15,000 to stand on the deck and watch.

Along the lines of North Pole symbolism, a Brit was up there a couple of weeks before the Russians for a little global warming dip.

On a truly Scientific note:
Nearly a month before the Russian submersibles, accompanying news crews and the 37-year old British lawyer/swimmer the Woods Hole Oceanographic Institution has been quietly conducting polar sea floor research with AUVs. The WHOI scientists are exploring the arctic ocean's Gakkel Ridge the deepest mid-ocean ridge, ranging from 3 to 5 kilometers (1.8 to 3 miles) deep, and it is also perhaps the slowest-spreading ridge.

The goal of the Gakkel Ridge expedition is to see if active hydrothermal vents are really there, to find them, and to learn if they, and the communities of life around them, are different. Videos of this exploration and its goals can be found Here.

I'll take the science over the symbolism, but there is something to be said about doing something really cool, even if it was mere symbolism. -LL
Posted by Lubber's Line at 9:57 PM No comments:

Bubblehead has a cool video up on his site of the USS Florida (SSGN 728) doing a multi TLAM launch.

I did my own little search of GoogleVideo and found this interesting clip of the USS Louisville (SSN724) doing that TLAM thing the per Trident SSGN way.

Great remix with the SNL clip of the VP doing a Slim Pickens Dr. Strangelove impression. 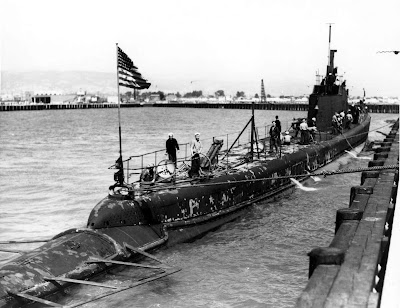 Video: Navy honors the memory of the USS Wahoo.

Lubber's Line
I'm an Information Technology Professional. I have 12 years of experience both military and civilian working in and around submarines. I also have a strong interest in the sea. 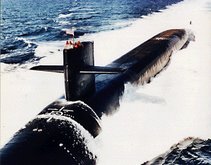 ... you're either QUALIFIED or you're NOT.